Cape Snoek…wolves of the sea [done]

RECIPE  for  Snoek Spread:  Saute 1 medium sized onion in 30ml butter until soft and transparent . Add about 200 gram flaked and deboned snoek, juice of a small lemon, 125ml creme fresh (or  cottage cheese) salt and pepper to taste as well as a shake of Worcestershire sauce. Add fresh herbs to taste (we like dill and/or parsley) Blend and refrigerate until required. Delicious on wholewheat bread.

It is no wonder our two sons love the sea – they were brought up in Walvis Bay, Namibia, and were taken on fishing trips when they were still in diapers.

Alex and his dad
Alex and Desmond

We headed out from a launch near the Cape Town Waterfront to hunt for snoek, those nasty looking wolves of the sea – to most people the quintessential South African fish. We must have looked rather comic as we chugged out of the launch site, four big guys perched on a tiny, pink rubber duck. After cruising about for a while we spotted a group of boats floating together about two kilometers off shore and we immediately knew they were into the snoek. The adrenalin was pumping, but we had to keep to a pretty moderate speed as the small boat climbed up and down the swells. Eventually we joined up with the other boats and rushed to get our lines in the water.

Snoek are vicious fish that will take just about any bait or artificial lure, but the traditional way to catch them is a thick handline, a heavily weighted lure and a large hook. The heavy duty tackle is used to haul the snoek out of the water as fast as possible…no arching rods and running drags here. The commercial guys use the handlines so that they can catch as many snoek as possible in a short time, but also so that the fish don’t tangle all the other lines hanging from the boat. Then of course there are the seals. They drift around the boats and rip into the snoek as they are being pulled up. Unless you get your fish out of the water quickly you can end up losing a significant part of your catch to the seals.

When you cook your snoek you occasionally find one that has a course, mealy texture. This is referred to as a ‘pap’ snoek (the word translates as soft/squishy). No one is sure why the occasional snoek goes ‘pap’, but I have heard a theory that if you fight them too long lactic acid builds up in the flesh, which spoils the fish. I’m not too sure I believe that theory, as there are plenty of recreational anglers who do catch snoek on relatively light tackle, but why risk it? (By the way, if there are any other theories on why snoek go ‘pap’, please post them in a comment to this article.

The snoek weren’t in a concentrated school, but rather seemed to be moving about in small groups. The boats were spread out in an area the size of maybe six rugby fields, and from time to time the fishermen on a particular boat would hook into two or three fish as the small schools moved around in this area. We had a frustrating few minutes watching the guys in the other boats pulling up fish, but suddenly my brother and I hooked up almost simultaneously. As my brother brought his fish to the surface a large seal grabbed it by the tail. The seal surfaced with the snoek in its mouth and a classic tug of war ensued, with the fish stretched between my brother and the seal, both equally determined. Eventually my brother pulled the snoek free, but now my fish was just approaching the surface and I watched helplessly as the seal dived toward it and ripped it from the line. Soon my brother had more fish on the boat, but I wasn’t having any luck and was still sulking about my stolen snoek. 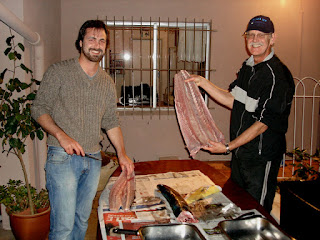 The worst thing about fishing with my brother is not that he usually catches the most and biggest fish (although that is pretty irritating too), it’s the way he starts dispensing advice after he’s brought a few fish on board. I grumbled under my breath as my brother offered tips on retrieval speed, depth and other snippets of wisdom.Eventually I did get my snoek and we had an incredible day on the water, ending up with nine large snoek between the four of us. It was delicious braaied over the coals basted with a mixture of olive oil, lemon juice and apricot jam.subscribe to posts