Bergsig developed out of the farm Niepothsdale – in 1894 the property was sold to Koos Stander, mayor of George from 1926 to 1932. In those days it was a big apple and cattle farm on the Eastern edge of George. The homestead was named Fairview and the house stayed in the Stander family from 1894 to 1974. By 1936 the farm still supported a substantial apple orchard, but was already surrounded by a number of subdivided smallholdings. When it was finally decided to develop the suburb of Bergsig there was much debate whether to call the suburb Appelboord or Bergsig.

The apple orchard made way for the development of Van Kervel School (there are a number of other schools close by : Outeniqua High School, George High and Glenwoodhouse . In 1976 Mr. Swallow bought the historic home in Stander Street for R33 000. Today the fully restored historic homestead is a Guest House, centrally situated in Bergsig on grounds measuring 3800m².

The Garden Route Mall is 3 km away and Victoria Bay, known for its excellent surfing, 8km. The eastern edge of town is also home to the very popular Outeniqua Farmer’s Market, held every Saturday morning amid lush greenery, next to the Old Saw Mill and opposite the Garden Route Mall. On the other side of the Saw Mill is Maurits Lammers Antiques – Maurits is a descendent of the Cape Town Antique dealer Mr. H A Lammers who was mentioned in The Oudshoorn Courant and Het Suid-Western on Wednesday September 27, 1978 : GEORGE: A magnificent leather-bound 260-year-old Bible was sold for R535.00 after brisk bidding…. The Bible was bought by a Cape Town dealer, who flew to George especially to attend the sale. Most of the goods on the auction were bought from the estate of the Stander twins, Blanche and Ethel. 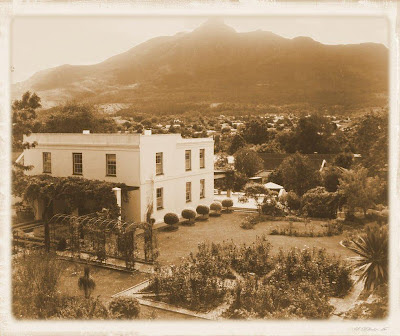 Bergsig is the suburb closest to the Outeniqua Railway Museum (2 Mission Road, George, phone 044 8018288, open Monday-Saturday). The museum houses a collection of restored steam locomotives and railway coaches. There is also a collection of privately owned historic vehicles, including a rare Brill SA Railways bus. The museum is the departure point for the Outeniqua Power Van, converted railway inspection trolleys, which runs up Montagu Pass. The van makes day trips up the Outeniqua Mountain, stopping at “Topping” for the passengers to enjoy their picnic. E-mail opv@mweb.co.za or phone 044 8018239 for bookings.
subscribe to posts